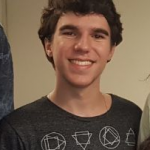 In 2012 I joined the Federal Institute of Espirito Santo as a student in the secondary education pursuing a technical degree in Electrotechnology. To this day I remember my firstLab practice class: My teacher introduced the class to a voltage source and explained how the electrical circuits worked. From that began the "clicks" on technology: my computer not only received powerand worked mysteriously, the car not only received fuel and spun its wheels; in both cases there was anabsurd amount of knowledge and centuries of technological and scientific development. What seems an obvious thought to me today was not so trivial to the boy I was then, who until then had only to worry about going to school to memorize contents and come home to play on the computer. This "click" made me much more interested in engineering, and thanks to it I'm still in the field.

Over the years I discovered computing from courses given by college students near home (Federal University of Espírito Santo) and as I learned more about the field, I moved further away from Electrical Engineering, until I decided to study Computer and Information Engineering here at UFRJ.

As the Computers and Society course is obligatory it was a matter of time to be introduced to the illustrious figures in Informatics and Society front. Over a period of four hours a week I got to know, learn, and have fun with the masters.

At the end of that same semester came up the idea of the Informatics and Society Lab, and although I was not part of the initial group of students in the lab (as I was in another research project), I knew that sooner or later I would eventually change a working environment where I was unhappy for a lab where I would be surrounded by friends who would work together for society.

Today I am here, surrounded by amazing people who want to do good.

And this is me: a happy student.