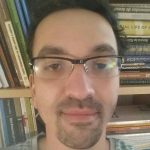 When I was beginning college, I had doubts whether walking through engineering or the social sciences. Telecommunications engineering won the battle then. When I was already in the graduate school--pursuing the master's degree in Informatics and Society at PESC/COPPE/UFRJ and researching free software, solidarity economy and democratic practices in Brazil--I was pleased to find out that the STEM and the humanities are more related to each other than some insist to say. During doctoral studies at HCTE/UFRJ, I keep following the tracks of those who transit between a "box" and another, and that generally also circulate on the margins of large companies and the state. This time, looking more closely at the surprising cases of "money" created outside the spheres of traditional banks and intertwined with information technology. Or, in the popular (better, though with the risks of inaccuracy) way of saying, digital social currencies.