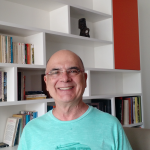 After I graduated from college at ITA, in 1967, I became a member of the Federal University of Rio de Janeiro as a titular professor at COPPE. In 1969, I went to the University of California, Berkeley, for a master's and a doctorate in Electrical Engineering and Computer Science, completed in 1973. Upon returning to Brazil, I returned to my activities as a professor and researcher at COPPE and NCE/UFRJ. I've also been director of NCE in 1976. During the period from 1977 to 1980, I've been coordinator of industrial and Technological Policy of CAPRE and Technical Director of Digibras (Ministry of Planning Institution). Between the years of 1981 and 1986, I was the CEO and President of Embracomp-EBC, a private company and a computer equipment producer. From august 1986 to July 1990, I was the CEO and President of COBRA S.A., owned by the government of Brazil. For two decades, I campaigned in Brazilian technical-political scene, intervening mainly on issues related to technological development, education and international division of labor. It was at this juncture that I returned to academic life and I approached the human and social sciences. From August 1990 to July 1992 I was a visiting scholar, of the Historical Studies Committee , New School for Social Research, New York, NY. I returned to UFRJ in 1992 on a part-time work and since 1995 on a full-time work as a researcher at COPPE and at NCE. Since then I have been working at CTS (Science-Technology-Society) Studies in Brazil at HCTE/UFRJ, and in 2002 I founded collectively the research group NECSO (UFRJ / CNPq). In 2009 I founded the Brazilian Association of Social Studies of Sciences and I was elected the first president and reelected in 2013 and 2015. I was a board member and president of the Brazilian Society of History of Sciences (SBHC) from 2009 to 2014. I retired in 2014 and between July 2015 to May 2016, I was Pro-Rector of Postgraduate and Research at UFRJ. Also, I'm editor of the journal Engineering Studies and I work as ad hoc advisor to several academic journals and government agencies.